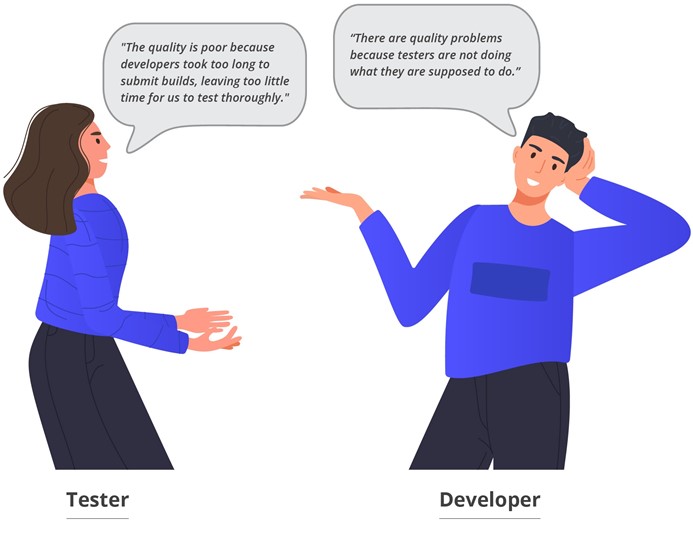 Suddenly, the software engineering team known for its proficiency and diligence towards work does not seem to get things done anymore. Deadlines go past the expected timelines while the high-priority projects slowly fall to the ground.

There are few areas you need to uncover why the star software team is falling apart:

1. Finger-pointing – the most common blame game

Finger-pointing is possibly the most lethal problem between developers and testers.

A regular dialogue between disputing testers and developers looks like this:

Two different perspectives and two different ways to blame the other to finger-pointing culture is highly toxic for team spirit, let alone the QA Testing Team and developers. Mainly, working in an Agile environment, the entire team takes ownership of quality, but clearly, acting irresponsible and blaming your fellow software engineer may kill team spirit and create barriers in meeting business goals.

What can you do? Take responsibility for your roles and do not involve yourself in other’s tasks unless for help. Leave room for the benefit of the doubt and be empathetic to your teammate. Or if you made a mistake, accept it, and do better.

Instead of finger-pointing, think as a team and manifest a solution-oriented mindset and consider saying, “I should have tested more,” “I should slow down the development process,” or “we should have documented the requirements more clearly.”

Vague reports are not that uncommon in software projects and become the starting point of rifts between teams. For example, a bug report like:

*Description: The system crashes many times on my PC. Kindly fix it asap!

You are likely to get responses like, “It’s working fine on my system, I cannot replicate it, that must be an undocumented feature!”

With incomplete information, you will only get reactive answers. The result is: duplication, abandoned work, missed deadlines, and more rift.

The next problem that affects team spirit is unclear prioritization. For example, if a product team does not list the most important feature requirements, the developers may be derailed from prioritizing what to code and deliver first.

Many times, it is a project manager’s job to prioritize. Managers may enlist new “top-priority” assignments in the developer’s or tester’s to-do list while expecting other ongoing tasks to get finished in parallel. They should understand that every task cannot be a “top-priority” task. Otherwise, it is easier to blame your team when the work is not completed under the deadline.

What can you do? Paying attention and understanding product requirements can save both testers and developers from a load of extra work. Realistically speaking, you can focus more on high-priority needs and tasks, but that does not mean leaving low-priority things in the backlog unattended. Small mistakes can turn into serious breakdowns. Communicate clearly about the top priority tasks instead of wishful thinking, whether you are a manager, tester, or developer.

Prioritization done from stage one creates clarity about the major tasks in the loop without wasting anybody’s precious time. QA Testing Tools like Kualitee are great sources to prioritize important requirements, tasks, and test cases, helping remove any communication and comprehension ambiguity among the team players.

4. Greedy for credit and glory

Have you come across a situation when a manager, tester, or developer took credit for all the hard work you have done around the clock? Mainly, software engineers live for competence and equality in employment. It is like taking your teammate’s capability and giving yourself credit for all the success — diminishing the real contributor from the screen. Credit greediness can create intangible tension between team players destroying productivity and even trust levels for quite a time.

Such situations result from lacking transparency and accountability in a team that allows the inefficient team members to take advantage of someone else’s work and enjoy the limelight.

What can you do? The answer is simple; you cannot push wicked ones to change. However, you can measure team performance and productivity on an individual level. Increase the transparency level of the tasks assigned. The rightful and proficient team relies on QA Testing Tools where every team member can see each other’s work progress and generate statistical reports. This builds trust between team members, eases tension in the work environment, and saves the grace of the tester or developer that worked for the project’s success, exposing the credit-greedy team members.

This kind of management takes place when the manager is seldom involved in the work. But they show up all of a sudden and spill every task and complaint on the table.

You will often find such managers saying things like:

They do not know what is happening in the project and when they finally get back, you get a bunch of unrealistic goals and impossible deadlines — only causing more hassle and trouble.

What can you do? A manager’s role is to stay in the know of all the work progress and even regress. A QA Testing Software helps in the clear assignment of roles and enhances the transparency of every team member. It is better to pick a versatile tool and engage for the best project management where every team member remains on top of their work without missing anything (even if they try to cut on something).

6. Showing disregard towards each other!

Soft skills are as vital, if not a lot more, as technical skills. We often take them for granted. In software development teams, trust issues, the pursuit of ulterior motives, egoistic behaviour, lack of balance between logic and emotion, and bullying become common if soft skill development is a low-priority thing. The team spirit continues to flicker, and the result is a failure!

What can you do? The simple solution is compassion and empathy. No tool or software can bring that. Changing habits is not an easy task, but it is definitely worth the effort.

The presence of acceptance and trust brings a sense of togetherness in the team where the result may not be a success every time, but certainly a more synergized team!

Check out: Why Test Case Management is Important and Which Tools to Use 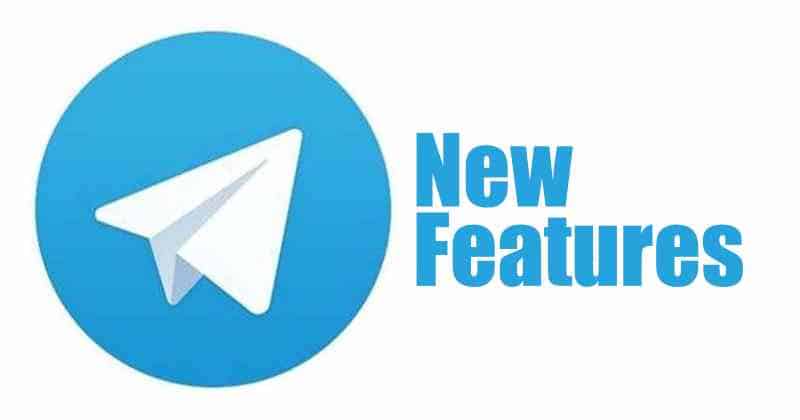 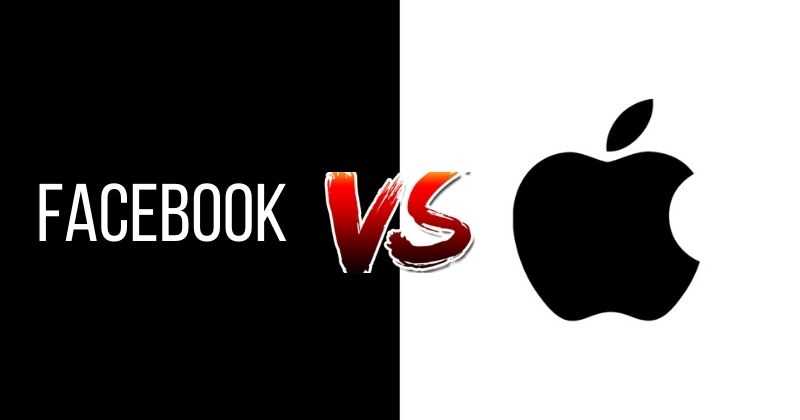 The Best Features of Crypto Trading That You Should Know

The realm of crypto trading quickly gained prominence. But have you ever considered the various causes for this? Nobody cares about the motivations be

What is On-Premises? Solutions and Real-World Examples

This article covers the basics of on-prem, also known as on-premises Infrastructure. It addresses all your questions, including What is the meaning of

How to Successfully Implement a CMMS

According to statistics, about 80% of all CMMS implementations have not been successful. When you look at the budget concerned with CMMS projects, the

As the global climate continues to pivot in response to the COVID-19 pandemic and other worldwide changes, the business world is also rapidly transfor